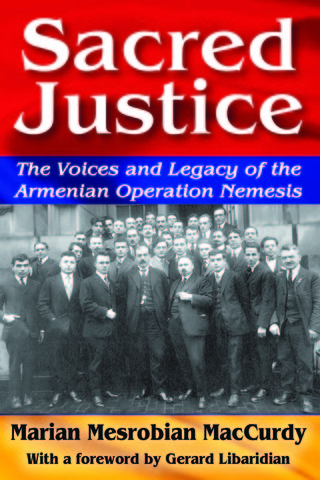 Sacred Justice: The Voices and Legacy of the Armenian Operation Nemesis

In 1990 the family of Aaron Sachaklian, the author's grandfather, discovered a collection of letters stored in cardboard boxes tucked away in the back study of a small frame house in Syracuse, New York addressed either to Sachaklian or to the Armenian Revolutionary Federation Central Committee of America. The letters described the activities of those dedicated to Operation Nemesis, a covert operation created to assassinate the Turkish architects of the Armenian Genocide who were tried and convicted of the crime of mass murder but who were never extradited back to Turkey.

Sacred Justice: The Voices and Legacy of the Armenian Operation Nemesis is a cross-genre book that uses narrative, memoir, original unpublished letters, and other primary and secondary sources to tell the story of a group of Armenian men who financed, planned, organized, and executed these assassinations during the years 1919-1923. Talaat, Djemal, and Kemal Pasha and other top leaders of the Committee for Union and Progress responsible for the massacre of over half the Armenian population of Turkish Armenia were convicted in absentia in military tribunals of statutory crimes since they had escaped on a night boat across the Black Sea to disappear into Europe and Asia. They were never brought back to face their accusers. Therefore, the leaders of Operation Nemesis took it upon themselves to seek justice for their massacred people. This book includes a large collection of previously unpublished letters that show the strategies, personalities, plans, and dedication of the three leaders of Operation Nemesis: Shahan Natalie, who supervised the European operation and who served as liaison to the American ARF; Armen Garo, the center of Operation Nemesis; and Aaron Sachaklian, the logistical leader and finance officer of the organization. The collection also includes letters from other key players in Nemesis, in particular Soghomon Tehlirian, who killed Talaat Pasha.

The leaders of Nemesis were members of the Armenian Revolutionary Federation, a political party formed in the late 19th century to resist Turkish oppression. Their goal after the Genocide was to wrench justice from the Turkish perpetrators who had escaped. To that end they were organized, dedicated, and patient, stalking their targets for months before making a move. Everyone followed orders, including the primary directive—no civilian casualties—and there were none. The letters show key moments in their efforts, including when and how they found Talaat and the day in June 1921 that Soghomon Tehlirian, who killed Talaat, was acquitted. The letter writer was one of the Nemesis men who had been assigned to be Tehlirian's translator. He wrote that just before the jury delivered the verdict, the courtroom was silent. Then the verdict came booming out: "’Nein!’” Immediately the courtroom exploded in applause, then became silent once again to hear the president of the court (the judge). “Soghomon quietly asked, ‘What are they saying and what does it mean?’ ‘That means you are free!’” Then the judge announced the court’s decision that Soghomon is acquitted and the courtroom exploded with loud applause and crying. Women and girls were weeping, running over toward the cage where Tehlirian was.

Some people are kissing his hand, some his forehead, former landlady is crying; you’d think that she was his mother. …I kissed his forehead … and went outside…At the door of the jail people have gathered, more than 200; there are many women with bouquets of flowers….[Letter from Vahan Zakariantz, June 11, 1921]

Another letter shows the efforts they made to preserve the covert nature of their operations: one letter was three pages of gibberish, words that made no sense, but a cut-out template was stored with it. When the template was placed over the gibberish, it formed the message. These men could keep a secret: it was rumored that a large organization helped to plan and fund these assassinations, but no one spoke of it, including the actual assassins. This is the first book that gives voice to the leaders of Nemesis.

Since this model of resistance stands in stark contrast to the victimization forced on many Armenian survivors, the book offers narratives of both trauma and resilience. The legacy of these varying responses to mass murder has been a part of Armenian history in general and this family’s history in particular. The author weaves together narrative, memoir, historical records, and personal letters to tell a story that has been either hidden by the necessity of silence or ignored in spite of victims’ narratives. Armenians have known for close to 100 years that the grains of sand in the desert of Der Zor hide the bones—and the spirits and tales—of the victims silenced in the Armenian Genocide. This is the story of those who attempted to seek justice for the victims and the effect this effort had on them, on their families, and on the Armenian community. Little has been written about Operation Nemesis. Perhaps as we approach the 100th anniversary of the Armenian Genocide it is time.